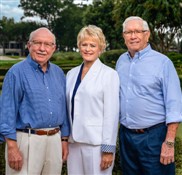 Meet Dan: North Carolina native Dan Lowman began his career in real estate in 1969 when he became a licensed Realtor. He has been working in the Hilton Head market since 1976 and was Broker-in-Charge of the first Century 21 Real Estate office on Hilton Head Island. He has been a leading producer with Dunes Real Estate since 1991. His technological expertise is second to none. Dan also has an extensive background as a homebuilder and real estate developer.

Meet Deb: Originally from Meadville and Erie, PA, as a former PNC Bank VP and Managing Director of Private Banking, Debbie Lowman brought her expertise in working with high net-worth clients, finance and networking to The Lowman Team in 2004.  She is highly respected by her clients and known for her attention to detail and outgoing personality.

Meet Tom: Tom was raised in New York and moved to the Berkshires full time in 1997. Tom got his real estate license in 2011 after a successful career in institutional equity trading and senior management positions. He has been investing in real estate since 2006 and is the co-developer of Highfield on Main, an upscale condo project in Great Barrington. Tom is licensed in MA, NY, CT, and SC and has worked with both commercial and residential clients. Tom has also served on the Board of the Community Development Corporation of Southern Berkshires whose mission is creating affordable housing and economic development.